WordPress and plugin vulnerabilities Tripled in 2018

More than half of these web application vulnerabilities (54%) have a public exploit available to hackers. In addition, in 38% of the cases, there is no mitigation solution available, such as a patch or a software upgrade”, the report stated.

Injection type exploits affecting web apps were the most numerous in 2018, Imperva counting close to 3,300 disclosures. A closer look revealed that almost 1,980 of them allowed remote code execution (RCE) and 1,354 enabled SQL injection attacks. The amount of cross-site scripting (XSS) vulnerabilities doubled since 2017, accounting for 14% of all security flaws reported for web applications last year. 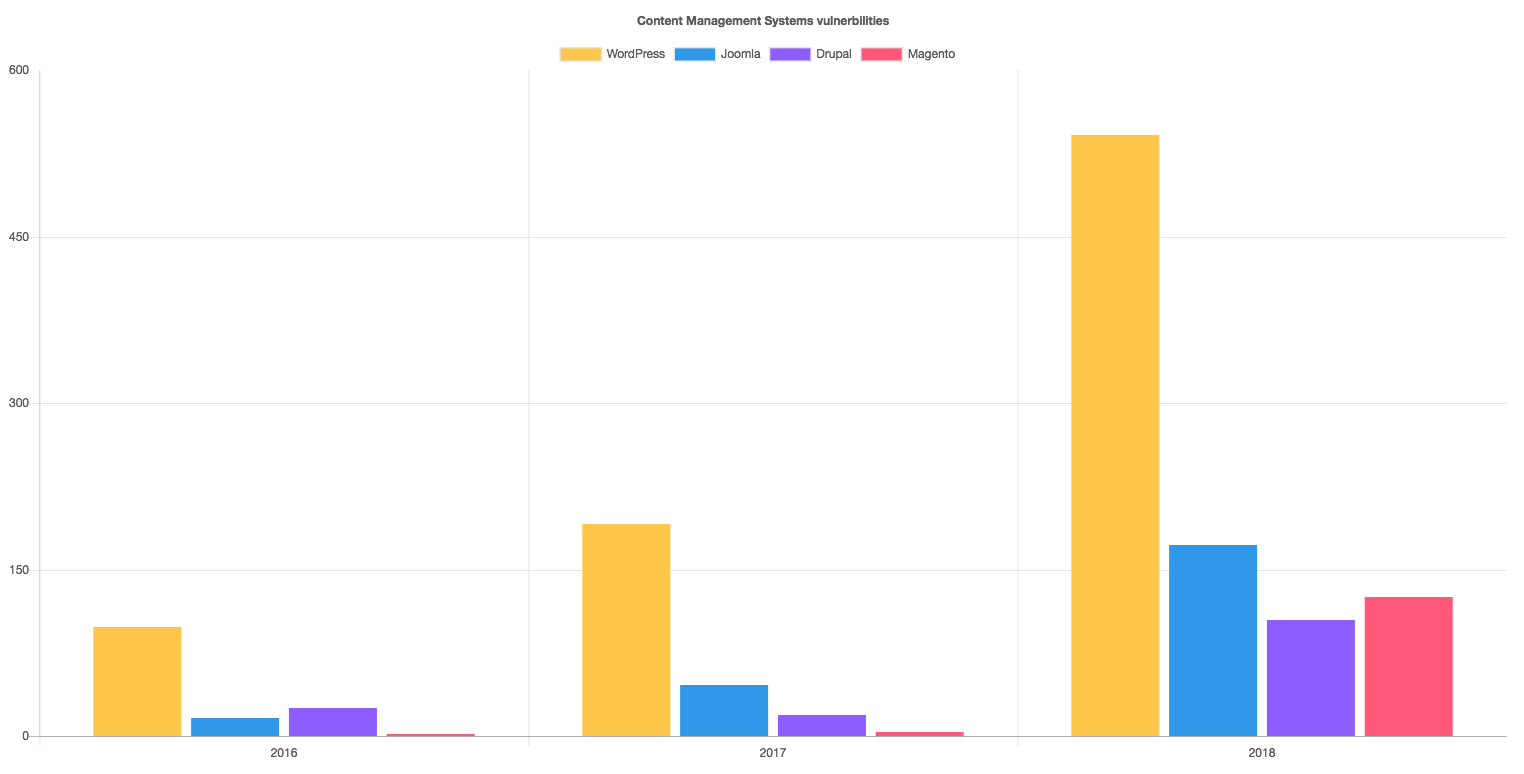 WordPress is the most popular content management system (CMS), followed by Joomla and Drupal trailing behind at a safe distance and is used by 59% of all websites using a known CMS. Attackers spent much of their time targeting WordPress, according to the report.

Over 55,000 plugins can be found on the official repository of the CMS, many outdated. Only 1914 (3%) of these plugins were added in 2018. The open source nature of WordPress means however that there is no enforcement or any proper process that mandates minimum security standards (e.g. code analysis). Hence, WordPress plugins are prone to vulnerabilities. WordPress patched an array of these vulnerabilities in 2018: Including a critical privilege-escalation vulnerability that could allow an attacker to inject malware, place ads and load custom code on an impacted website; and two bugs rated “medium” in its tooltips plugin.

The 10 WordPress plugins that are considered the most vulnerable in 2018 (it should be noted that this does not mean they are necessarily the most-attacked plugins), according to the report:

While WordPress leads the pack in sheer attack numbers, Drupal, the third-most popular CMS had two serious vulnerabilities in 2018, CVE-2018-7600 and CVE-2018-7602. These vulnerabilities allowed an unauthenticated attacker to remotely inject malicious code and run it on default or common Drupal installations and were the root cause for mass attacks that targeted hundreds of thousands of websites in 2018. Most notably last year an infamous highly-critical Drupal bug dubbed Drupalgeddon 2.0 impacted an estimated 1+ million sites running the CMS 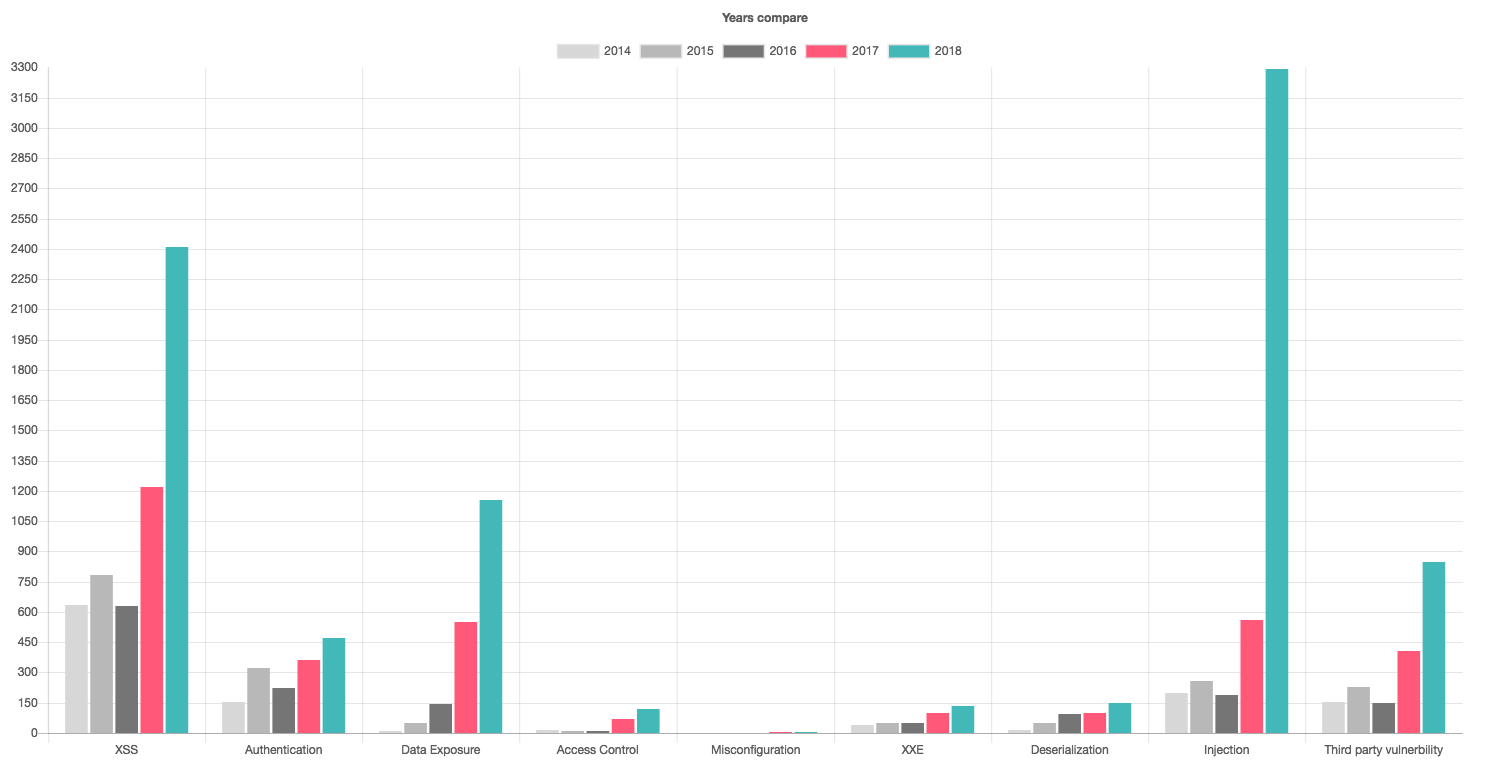 Total Donations is a commercial plugin that helps sites create donation campaigns and accept payments from their visitors and is currently used by many non-profit and political organizations who want to accept donations from donors using a donation form. Attacks on the Total Donations plugins have been tracked over…

The popular GDPR Cookie Consent plugin, which has been downloaded over 700.000 times, was temporarily removed from the WordPress.org plugin repository earlier this week after the developer was notified of a critical bug. Two days later (on February 10) a new version 1.8.3 was released. This new version contains…

WordPress 4.7.2 was released last Thursday, January 26th. WordPress have just announced that In addition to the three security vulnerabilities mentioned in the original release post, WordPress 4.7 and 4.7.1 had one additional vulnerability for which disclosure was delayed. Join Our Online Security and Hosting Newsletter Today and stay…

WordPress 4.2.3 is now available. This is a critical security release for all previous versions and we strongly encourage you to update your sites immediately. Join Our Online Security and Hosting Newsletter Today and stay updated with the latest news, updates, releases & much more. Subscribe Email I agree…

The popular WordPress plugin, Social Network Tabs, which has been downloaded over 53.000 times in the past 7 years and is used to help users share content on social media sites, left thousands of linked Twitter accounts exposed to compromise. Join Our Online Security and Hosting Newsletter Today and…

WPBrigade, the developer behind the Simple Social Buttons plugin, have just released a fix to a critical vulnerability. This vulnerability allows an attacker to completely take over a website. Join Our Online Security and Hosting Newsletter Today and stay updated with the latest news, updates, releases & much more….

A serious vulnerability has been discovered in older versions of the popular Code Snippets plugin for WordPress. The flaw allowed anybody to forge a request on behalf of an administrator and inject executable code on a vulnerable site. This is a Cross-Site Request Forgery (CSRF) to Remote Code Execution…

Three vulnerabilities in LearnPress prior to version 3.1.0 have been discovered. LearnPress is a popular plugin with more than 50.000 installations for the WordPress CMS that can be used to create and sell courses online. LearnPress is similar to Moodle, an open source learning platform. Join Our Online Security…

Researchers of the Threat Intelligence team of WordFence have warned on Tuesday that WordPress plugin WP Database Backup contains a critical vulnerability. The developer has since patched this flaw. Join Our Online Security and Hosting Newsletter Today and stay updated with the latest news, updates, releases & much more….

The Arigato Autoresponder and Newsletter by Kiboko Labs plugin allows scheduling of automated autoresponder messages and newsletters, and managing a mailing list. You can add/edit/delete and import/export members. There is also a registration form which can be placed in any website or blog. Join Our Online Security and Hosting Newsletter…

An exploit was discovered in The Media File Manager plugin version 1.4.2 for WordPress. This vulnerability allows for directory traversal and the initiation of a remote cross site scripting (XSS) attack via the dir parameter of the mrelocator_getdir function of the file wp-admin/admin-ajax.php. A working exploit has been dislosed….

Ad Inserter is a popular WordPress plugin for managing advertisements. Last week it appeared that version 2.4.21 and below of the plugin contains two critical vulnerabilities. The developer has since released an update to patch the vulnerabilities. Users are advised to update as quickly as possible. Join Our Online…

Researchers have found a serious bug in the WP Live Chat Support plugin. This is the second time in six weeks that a vulnerability has been found in the plugin which is being used on thousands of WordPress websites. The latest bug allows hackers to inject their own code…

WordPress 3.8.2 is now available. This is an important security release for all previous versions and we strongly encourage you to update your sites immediately. This releases fixes a weakness that could let an attacker force their way into your site by forging authentication cookies. This was discovered and…