How to install and configure Munin on CentOS 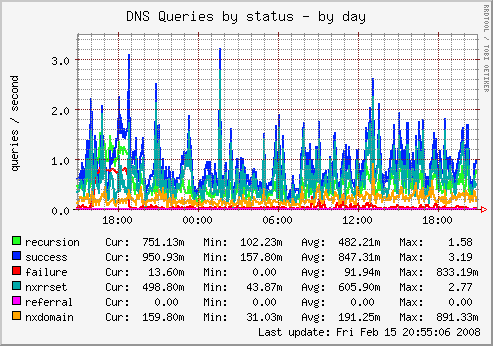 Munin surveys all your servers and remembers what it saw. It presents all the information in graphs through a web interface. Its emphasis is on plug and play capabilities. While it may not be the most scalable solution, it's flexible, yet easy to understand when monitoring a dozen or so servers.

Munin uses the excellent ​RRDTool (written by Tobi Oetiker) and the framework is written in Perl, while plugins may be written in any language.

This how-to guide explains how to install and configure Munin and Munin Node on CentOS 5,6,7 or Fedora.

Note: This guide assumes you are familiar with SSH and basic command line navigation. These instructions apply primarily to customers who have Virtual Private Servers or Dedicated servers. If you do not have root-level access you will not be able to make these changes.


If this command does not work, perhaps because the CentOS Extras repository is disabled, the section below provides manual installation instructions based on your distribution version.


If you receive a File Not Found Error message when trying to download the package, the version number might have changed. You can access the latest version of the RPM installer from the Fedora EPEL wiki page. The wiki page also includes additional instructions for Red Hat Network subscribers who are installing the EPEL repository.

Note: There is no need for Fedora users to install the EPEL repository. Munin is already included in Fedora and can be installed using yum (see step 1.2).


Before we begin, first ensure that your server is up-to-date:


You are now ready to issue the command to install both Munin and Munin Node on your server. This command also installs all dependencies, such as RRDTool that are required by Munin.


Now create the system startup links for Munin and startup the Munin daemon for the first time:


Note: Munin requires a working web server on the host server, such as Apache or Nginx to render and display its statistics pages.

Note: Munin requires firewall port 4949 to be opened. The Security of your Munin installation is outside the scope of this tutorial. For a guide detailing the ins and outs of the popular CSF firewall please follow this guide

The configuration file for Munin can be found at /etc/munin/munin.conf


You can simply uncomment the values above. The defaults are fine in most cases. You can also adjust the htmldir accordingly depending on where you would like the files to be generated.

In case you'd like Munin to be tied in to a DirectAdmin account, you'd enter the following:


The host tree should be adjusted as well. You can set a custom name for your server. All remote servers you wish to monitor need to be listed here:


Once the munin.conf file has been updated, you’ll need to adjust the permissions of the html directory.

In the example below I set my html directory to /var/www/html/munin . To allow munin to write to it we’ll have to change ownership to the correct user:

Edit /etc/httpd/conf.d/munin.conf and uncomment if required the htpasswd section as below:

If required be sure to rename the AuthName to a username you prefer.

Then password protect Munin with a username and password using Apache basic auth module as shown below. The username "Munin" can be replaced with anything you desire:


Now is a good time to restart Munin in order to make the changes take effect:

The configuration file for Munin Node can be found at /etc/munin/munin-node.conf

For security reason, I'd like Munin to run under a less risky user.


Alter the listening address to bind to localhost only:


Add the IP Address of the Munin Daemon: Do not forget to leave localhost (127.0.0.1) active when configuring external munin nodes in munin-node.conf So, you'll need a total of 2IP's minimum.

Munin has basic support for sending mails when specified warning and critical thresholds are exceeded. If you aren’t already running a notification system, such as Nagios, Munin’s notification are quick to setup and work reliably. A few changes to munin.conf are all that’s needed.

First, you need to configure contacts, which enables the notification system.

Above, I define a contact entry named me. Pick any name you would like. Next, the specific command action is defined. It’s a simple string to be executed by a shell which will receive the body of the alert message as STDIN. For sending email an appropriate command such as mail is used. Finally, mails will always be sent on any warning or critical state.


if required you can add a specific user that you send the alert to in the host tree of /etc/munin/munin.conf:

Tresholds can be set by editing the host tree in /etc/munin/munin.conf.

The easiest way to figure out the correct graph name is by hovering over the graph.

If you’re running a server with CentOS 5/6 with Munin installed to graph the system stats, you’ll mostly likely notice that the generated graphs do not include MySQL.

This is expected behaviour since cPanel, DirectAdmin or Virtualmin ask you to define a root password for your MySQL server (so it isn’t left unsecured out in the open). Unfortunately, by default, Munin tries to read MySQL data using the root account and without password and thus fails.

Login to Virtualmin and navigate to Webmin > Servers > MySQL Database Server. Create a new user munin and define a password, set it to only log in from localhost and add the Superuser permission.

Now navigate to Database Permissions and add the previously created munin user on database MySQL, again only for localhost and only grant the Select table data permission.

For MySQL monitoring to work we need a few dependencies.

or by using CPAN:


if perl-Cache-Cache is missing, first install and enable the EPEL repository (see 1.1) and then continue by installing the module.

Open the /usr/share/munin/plugins/mysql_ file and edit:

You should see something like this with the credentials left blank:

Open the /etc/munin/plugin-conf.d/munin-node file and add (or edit if already exists):


If you’re using innodb tables, you will need to create the /etc/munin/plugin-conf.d/mysql_innodb file to ignore InnoDB related errors (which Munin will most likely generate).

Enter the following to reveal what MySQL plugins are available:

To enable all of them simply run the following:

If you only need a few of them you can apply them this way:

To test if the plugin works, run in the console:

Be sure to reload munin-node:

Monitor your drive and RAID health and performance. Begin by ensuring that you have smartmontools installed:

It's always good to have a clue about your connectivity to the rest of the world. You can setup the ping plugin using a simple correctly formatted symlink:

Once lftp is installed, it's time to create our monitoring script: /usr/share/munin/plugins/backup_space

save this file and create the following symlink:

If you test the script and get the error Certificate verification: Not trusted:

To see which plug-ins are installed on a munin node, log into it and run the munin-node-configure command:

Deciding what to enable

If your output includes any error messages at the end or complaints about “junk output”, don't worry. That just means a plug-in was queried that didn't give a proper response, it doesn't affect munin's operation.

Note that the output with ”–suggest“ is usually shorter than the complete list of installed plug-ins. When you ask munin-node-configure for its suggestions, it lists plug-ins that are written to respond to that query and also omits many plug-ins that are already installed.

Each plug-in name is followed by a “yes” or “no” indicating whether or not it's currently enabled. The last column might contain a suggestion regarding a plug-in's status. A “yes” suggestion indicates that a plug-in is currently supported by your system and can be enabled without making changes (like the postfix plug-ins in the example above). Other entries in the “Suggestions” column can offer details about issues that need to be corrected before enabling a given plug-in.

On a host where munin-node is installed, you can check to see whether the plugin runs by using the munin-run command. You can test a plugin with and without the optional config and debug variables.

Does the plugin run through munin-node, with and without config? Hint: Telnet to port 4949.

If the plugin does run with munin-run but not through telnet, you probably have a PATH problem. Tip: Set env.PATH for the plugin in the plugin's environment file.

you can verify that the Munin service is running with ps and netstat:

In the example above, you can see that the daemon process is running and that it is listening on tcp port 4949.

Installation of SpamAssassin on DirectAdmin

In this guide I will be explaining how to install and configure SpamAssasin on a Direct Admin...

Installation of Directadmin on CentOS

In this guide I will be explaining how to install DirectAdmin on a clean installation of Red Hat...

Installation of Directadmin on CentOS

In this guide I will be explaining how to install DirectAdmin on a clean installation of Red Hat...

The guide below is applicable to systems running CentOS 6, CentOS 7 and CentOS 8. The...